Get creative and competitive with new challenges from the Scavenger Hunt and You Can Choose Your Friends But Not Your Family, listen along to two fantastic commissions from Lewis Wickwar’s Top Of The Pipes series from Diss, we go live with Sarah Thom from the magnificent multinational arts collective Gob Squad, the Diss Radio Local workshop participants come to steal the show and take over the airwaves, and we are joined by the marvelous mayor of Diss & Local Legend Sonia Browne.

Dance Challenge with The Garage

The Garage are challenging you to dance!

Our friends at The Garage are experts at keeping boredom at bay and have recently moved their programme online – you can take part all from the comfort of your own home. From street dance to theatre, Zumba to music, there’s something for all ages and abilities!

Find out more about The Garage

Finn Doherty is a young singer, songwriter, multi-instrumentalist and producer. Although his musical background was originally based on Traditional Irish Music, Finn began writing music at the age of 7 after having several guitar lessons, and recorded an mini-album on his lodger’s laptop at the same age. Finn has since developed a dynamic and ambitious sound that combines Hip-Hop with landfill indie rock and acoustic soul, assembled with a DIY approach.

In May 2018, Finn debuted a new single, Feel so Good, followed by his mixtape The Choice That You Made in June. Off the back of this record, Finn and collaborator Ben James played live sessions for BBC Introducing and GAK, in addition to a long run of shows that included opening up for acts like Hobo Johnson and the Lovemakers.

Find out more about Finn Doherty

Paul O’Donnell would have performed the almost entirely imagine Bon Jovi musical, We’ve Got Each Other, in the Adnams Spiegeltent as part of Norfolk & Norwich Festival 2020.

Find out more about Paul O’Donnell

Hunt & Darton have a chat with Paul to talk about this Bon Jovi spectacle: 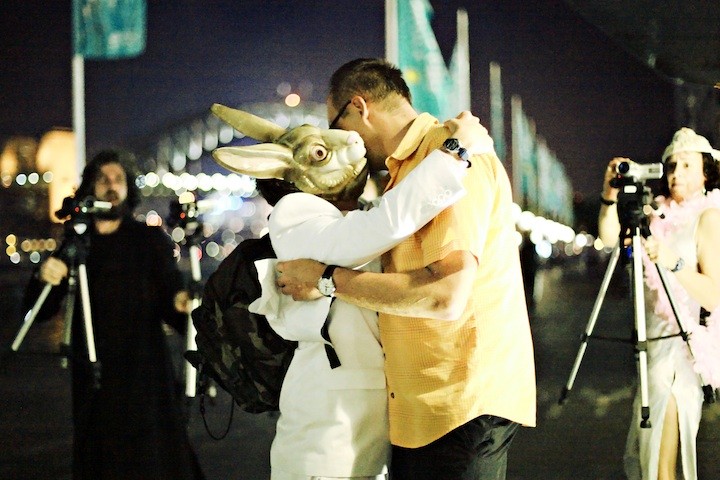 Gob Squad were set to return to Norfolk & Norwich Festival in 2020, 15 years after their first Norwich performance of Super Night Shot.

Sarah Thom, one of the founding members of Gob Squad, joins Hunt & Darton to talk about Super Night Shot and their upcoming project Show Me A Good Time.

Find out more about Gob Squad

Find out more about The Corn Hall

Discussing colours during dinnertime with the Townley and Bradby Family.

Sonia Browne is Mayor of Diss, and is the first person of colour and second woman to be elected for this role. She is also an advice champion and debt specialist with the Help Through Crisis project at the Citizens Advice Bureau, and a committee-member in Community Engagement, Heritage & Facilities, and Infrastructure for the Council. Through these committees, she is involved with various projects including the Neighbourhood Plan, Youth Council, Diss Carnival and supporting Diss Traders.

Top of the Pipes

Lewis Wickwar is a filmmaker and freelance arts worker. The aim of his pieces from Diss Organ Festival is to create a soundscape which evokes the feeling of walking around the festival, meeting some of the characters and hearing some of the instruments which you’d typically hear if you attended, and to find out a bit more about the culture. He would like to thank Jonny Ling for letting him focus on his festival, James Dundon for donating a huge selection of audio material from his archive and Iain Lowery for helping to edit and then mix the pieces.

Over the years he has made films with people of all ages and abilities. He works as collaboratively and informally as possible, using equipment that is accessible and tactile. Acknowledging that the film industry is a competitive place, Lewis offers an opportunity for beginners to explore the medium in a freer, less pressured environment where there’s room for trial and error. He encourages people to mix film, animation and special effects techniques to express themselves and enjoy seeing what weird and wonderful results they can come up with.