We interview project partner Joe Mackintosh from SeaChange Arts in Great Yarmouth, hear new commissioned work from Lucia Scazzocchio and the first of their Audio Postcards from Great Yarmouth, we meet Norfolk & Norwich Festival 2020 artists and collaborators responsible for the art vending machine – The Clunker, Davide Lakshmanasamy & Jake Francis, we hear the news from Maggie Kennedy, we talk with Norwich Local Legend Terry Baine about his fascinating career in Horticulture and Norwich City Council, and again we are joined by guest presenter Victoria Melody.

Listen back to the full episode

A passionate horticulturalist, Terry worked for Norwich City Council 43 years and 6 months, is an Honorary Ambassador for Anglia in Bloom encouraging the regional environmental campaign and a Life Member of the Royal Horticultural Society.

Terry started to create and develop a “Norwich in Bloom” website in 2002 showing the elements of Norwich in Bloom partnerships, sponsorship and people that have made Norwich so attractive for so many people to enjoy and benefit from. Terry continues to develop and archive this website as a historical reference to show some of the activities, events and achievements and the people, business and organisations that kept Norwich Blooming from 1986 to 2020.

Find out more about Norwich in Bloom

A Chat with SeaChange Arts

Great Yarmouth based but collaborating internationally, SeaChange are an independent arts development charity – dedicated to delivering outstanding opportunities for artists and communities through supporting hosting and delivering circus and street arts projects and events.

They run the Drill House, an international creation centre, offering residencies to creative companies and artists of all sorts, a base for various community activities and flexible function and event space for hire.

Much of this work is showcased each year at the  Out There Festival.   Produced by SeaChange, Out There is now the region’s largest free festival of street arts and circus and regularly attracts audiences in excess of 60,000 people.

Find out more about SeaChange Arts

We get a news update from Maggie Kennedy, 80 years old.

Maggie is currently working from home on a tribunal and has had a very successful career in prosecution.

Guest Presenter Vic Melody takes over the show to talk stand up comedy in Norfolk with comedian Ciara Jack.

The Foreign Cafe from Dulce Duca

Commissioned artist Lucia Scazzocchio conducted interviews with members of the community in Great Yarmouth in order to create ‘Audio Postcards’. Participants were asked to collect sound recordings of an area that had special meaning to them – this made up the visual/picture side of the postcard. Then they were asked to record a message similar to the written message on the back of a postcard. When combined the resulting product is an Audio Postcard – that captures the essence of people and place.

Dulce Duca is a performance artist, mixing circus, physical theatre, music and dance in eccentric ways. Her shows are based on human emotions in a comic and intense form, integrating new juggling language and skateboarding. 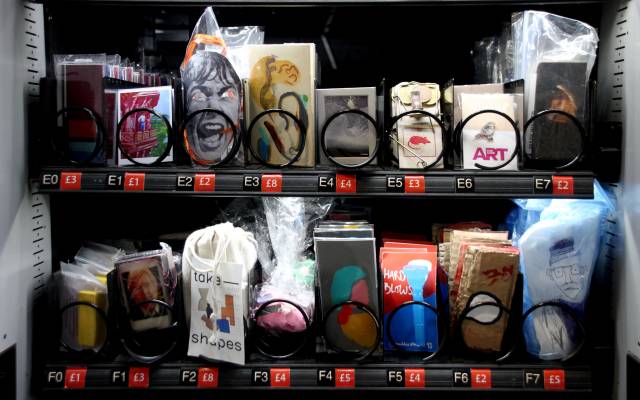 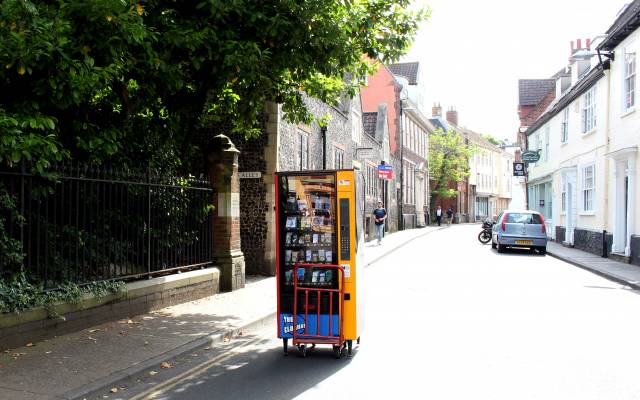 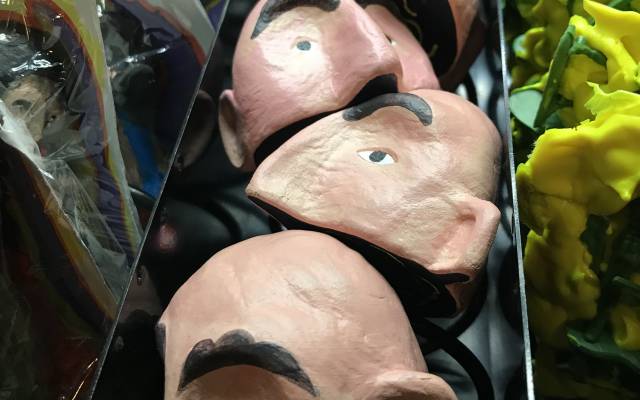 The Clunker is an art themed vending machine which allows artists and art lovers to enjoy accessible and affordable artworks in a social and casual environment Over 40 artists from in and around Norfolk and across the world will be showing within the machine. Works range from sculptures, prints, paintings, digital media, installations, drawings, and collaborative pieces.

Find out more about The Clunker project

Hear from the creators of The Clunker, Jake and Davide

Hear from the artists collaborating on The Clunker below.

Based in South Cambridgeshire, Charlotte is displaying her works under the pseudonym G.Burgess and Co. and features a range of taxidermied mice, each climbing a cord to a wooden cloud.

Based in Heapey, Lancashire Mulholland’s works are Inspired by Steiner School toy policies, translating Cockney Rhyming Slang into a collectable object and play thing. They’re 3D printed and hand painted models in the shape of apples and pears with arms, legs, and grimacing faces.

From Norwich, Oliver is providing The Clunker a 10-edition set of cassette tapes, each featuring processed field recordings of wire fences, stairwells, and water-towers from across Norfolk.

From Stockport – A range of ceramic creatures intended to be used as grounding objects for people with anxiety, PTSD etc. Each creature is
unique and has a form/texture that allows the person to focus on the present moment by feeling changes in the shape and textures and allows them to step away from their racing mind.

Based in Norwich, Robbie’s submission features a range of mini ceramic legs, which are somewhat designed to break when they fall from the vending machine shelf. The works invite the would-be buyer to interact with the works repair, and to receive some good luck in the process.

Daryl is based in Milton Keynes working in illustration and graphic design using a mixed media approach. For The Clunker he created a one shot comic based around future archaeology of a fallen satellite.

From Essex, Cherish has attempted to subvert the modern nude picture with retro technologies. Instead of being able to access nudes with a quick image search, Cherish has included pictures of herself on floppy disks posing nude as famous artworks, making would-be purchasers having to work for their viewership.

Find out more about Cherish

Sam is a fine artist based in Manchester. For The Clunker Sam has created a photographic collection named Still Water, a series of abstract prints exploring water through the lens.

Find out more about Sam

From Norwich, Roanna has readopted some of her illustration works into jigsaw puzzles, allowing the audience and buyers to recreate one of her signature drawings in a playful way.

From Germany, Oliver’s submission is ‘The Obox’ which is a small electronic instrument based on touch. On the faceplate of the wooden box there is a speaker and a circuit board. As soon as the circuit board becomes touched by the player, the instrument outputs sounds within a range of high and lower tones.

Ben is a Norwich based artist creating water colour paintings using contrast and light to create a sense of drama and expression. For The Clunker he has created a series of miniature oil paintings depicting jellyfish in their various forms.

Find out more about Ben

Jack is a fine artist and sculptor and Georgia is a curator, based in London. For The Clunker they have been creating miniature plastic works.

Find out more about Jack

Find out more about Georgia

Emily is an illustrator from Norwich, using 3D digital modelling. For The Clunker she has created Be Character Cards.

Find out more about Emily

Based in West Cornwall, Caroline’s work pulls from a variety of techniques and cultural forms. For The Clunker she has produced lino prints onto Chinese Paper which has been folded into Origami Houses. The Machine will display the kits as flat-packed sets, allowing the buyer to construct them and finish the piece themselves.

Find out more about Caroline

Mark is an artist based in Brighton. He paints, sculpts, draws and uses photography and digital media for his art. For The Clunker he has made chrome postcards.

Find out more about Mark

Alice is a Norwich based artist mainly focusing on textiles and animation. For The Clunker she submitted an abstract short film based on a day and a night spent on a beach in North Norfolk.

From Bedfordshire, Leanne’s submissions are postcards featuring photograms that resemble X-rays. Each image is based on Leanne’s research and shows a skeletal image of British Wildlife who have been injured or killed by litter.

Find out more about Leanne

Charlie is an artist based in Sussex. For The Clunker he has created collages of a variety of political figures as well as a series of sun tracker images.

Find out more about Charlie

Clair is a photographic visual artist and educator based in Leicester. For The Clunker she created Bug Badges, felt broaches inspired by butterflies, beetles and spiders.

Find out more about Clair

Michael is a sound and visual artist based in Norwich. For The Clunker he created two five minute electronic compositions.

Find out more about Michael