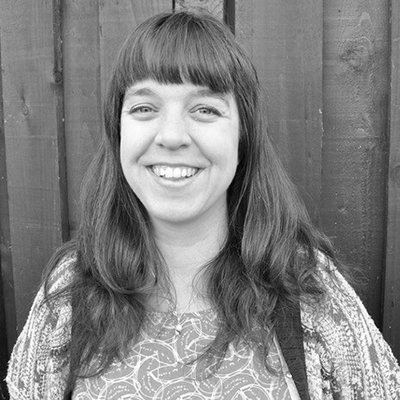 Creating The Journey: How to Make a Public Soundscape

For 2019’s Festival Launch, we worked with a team of artists and producers to create The Journey, an immense evening of storytelling centred on a highwire walk across Norwich Market. In this post, Sound Designer Helen Atkinson charts her experience of the project, capturing voices from across the county to create a sonic story of Norfolk, migration and home.

Back in early 2019, Norfolk & Norwich Festival were creating a launch event for the coming festival. The project was an ambitious wire walk cross the historic Norwich market place; from the top of Jarrolds department store to the top of the Forum.

Mark Denbigh, Head of Production and Programming for the Festival, approached me about Sound Designing the show. We had worked together alongside Conish composer Victoria Abbott on another show for the festival in 2015, Wolf’s Child, which was a large scale promenade theatre piece made by Wildworks at the National Trust property Felbrigg Hall. And so, it was Vicky and I that made up the sound team on The Journey. 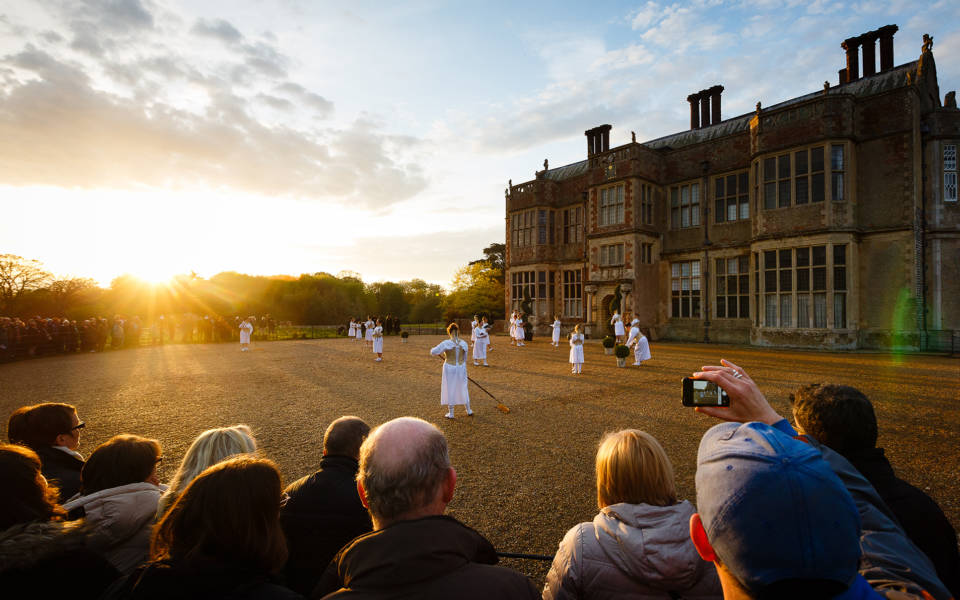 Why was it called The Journey? Well, our brief was ‘Journey’: Journey’s through time; Journeys through space; sense of being and place, Norfolk and what it means to all of us. Migration of people; migration of birds; immigration and history of all these things, and it had to be about the market place in Norwich where the event was taking place.

So… not too much ground to cover!

We knew we had to get out there, speak to people and record their stories. I’m based here in Norwich, but in fact I’d only just moved to the area. I was a stranger myself, so it made sense for me to go out and talk to people.

Sarah Witcomb, the Festival’s Creative Learning Manager, was enlisted to help find participants. Sarah connected us with members of the local community young and old: school pupils; a bird expert, and an archivist as well as market traders and people I cornered on the street. Friends and neighbours and taxi drivers.

You see, Norfolk is a really interesting place. Did you know that the first footsteps known to man outside of Africa where discovered over 800,0000 years ago on the shores of Happisburgh, Norfolk? And the Strangers, they were a group of protestant refugees fleeing persecution in Spanish Flanders? The first Strangers were invited to settle in and around Norwich in 1565 to boost to the textile industry. The Strangers were the ones who brought canaries to Norwich. The canaries would be singing away whilst the weavers worked on their looms, like an olden day radio.

These stories really resonated with us: the welcoming of refugees; the movement of people, the fact that people have always moved through out history and today is the same. Norwich has City of Sanctuary status, and is actively promoting welcome and sanctuary for those who need it. 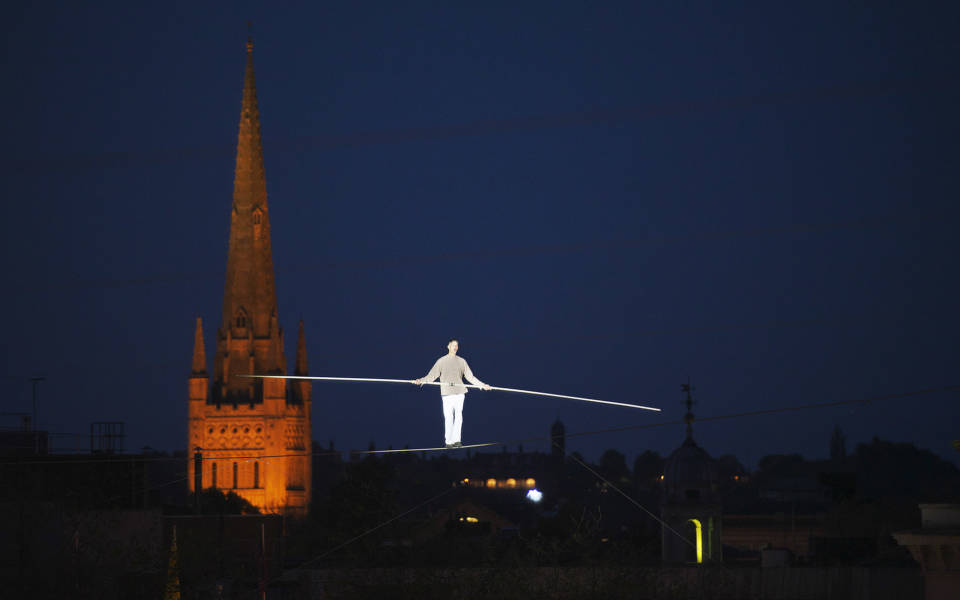 Chris Bullzini, our fantastic wirewalker, was also a Stranger to Norfolk. We felt his Journey across the wire should reflect the journeys of many people, mammals and birds across the centuries. He was our everyman in our story of journey and welcome; the lone stranger crossing the city.

It was fantastic to hear the different stories of the people we spoke to. One chap had come to Norwich from Texas as a missionary and had stayed for love. Another lady of 86 had lived in Norfolk all her life. One young man had come as a refugee from Pakistan and had to adapt to growing up here. Another from the Congo had set up a tailors shop in Anglia Square. Londoners came up for the rave party scene in the 90’s. Others that had moved back for family or a new life in this part of the country.

I spoke to local archivist Frank Meeres who shared his knowledge of the rich history the county has of accepting and inviting refugees. Richard Powell from the RSPB talked to me about the diversity of the migrating birds visiting Norfolk each year. I went to the market and spoke to the stallholders and the resounding opinion was everybody loves the market! School children talked about their hopes and dreams for the future, which was inspiring. Local wildlife audio recordist Sophie Marritt contributed her recording of the pink footed geese flying over, and sound artist Richard Fair offered sounds from his website, the Norfolk Sound Map.

I also spent time with Unlocking Our Sound Heritage at the Norfolk Records Office, listening to some of their collections of oral histories. Particularly, the records of Patrica Daniels, which is a collection of recordings made in the 1980’s, interviewing people about living in King Street Norwich in the 1900’s. It shares stories about what life was like growing up in the Yards.

In the end I had hours and hours of recordings (all amazing!). I could have continued collecting people’s stories forever. It was so fascinating to hear how life weaves together making us the people we are.

The next step was to turn all of this amazing stuff into a show that represented everything we had heard, and complement Chris’ momentous walk.

Vicky was writing the music for a four piece a cappella group, taking the recordings I had made for inspiration. We wanted to use the verbatim text to make the song lyrics. We knew that the final product would be a mixture of people’s recordings as voiceovers and the songs that would also come from the words people spoke. The two elements would twist together to tell the story.

You know Norwich has the most churches of any city in the UK, and with over 650 churches in Norfolk, as a county we have the greatest concentration of churches in the world? We wanted to create an ending to the walk that didn’t overshadow Chris’ amazing achievement but was very much of the city. So we asked the bell ringers of St Peter Mancroft to ring their bells in celebration! 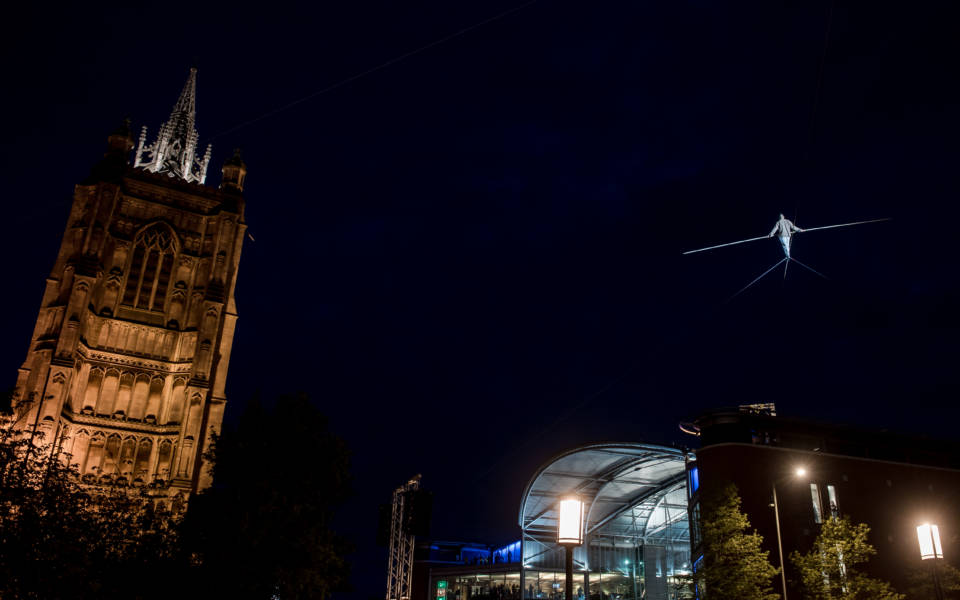 When Chris stepped onto the Forum roof we wanted bells to ring out in everyway from every corner of the city, so we hooked into a microphone in the St Peter Mancroft bell tower and amplified the sound around the whole market place. We added a recorded track of bells to accompany the church bells –  bike bells, church bells, hand bells, any bells, all the bells! We wanted it to be a real celebration of Norfolk & Norwich and togetherness.

As a sound designer I also work with audio suppliers and production engineers to specify the technical needs of the production (for this production we worked along side W1 Productions). The audience needed to be able to stand in several locations along the wire. In theatre sound we love making the sound seem as natural as possible, as if it’s coming from the source. My initial idea was to have the sound emanating outwards from the wire as much as possible. And this kind of worked because we needed to put the speakers up in locations around the market where they could stay out overnight without blocking roads or fire access routes. We used large format line array speakers, like the ones you see at festivals, because for the footprint and size they can really pack a punch. We filled in with smaller speaker boxes and subs to get as even sound coverage as we could between the Forum – in front of City Hall – outside Guildhall – and Gentleman’s walk.

The one thing to say about Norwich city centre around the market is there are a lot of flat surfaces so the sound does bounce around a fair bit, especially because we had multiple speaker points spread out along the wire. I’m not sure we could have reduced this bounce significantly without compromising the logistics of this event, I think it’s part of the nature of the space and audience layout we were working with.

The singers were located on the roof of the Guildhall for the event and we had a sound desk controlling all the microphones and playback of the voiceovers located down by the Market place. My job during the show was to cue the singers and the playback into the correct song and sets of voiceovers. This is unusual in my role as sound designer but myself and Vicky knew the sound world the best and in a live event anything could happen so Vicky was keen to have eye contact with me so that if something needed to move or change we could communicate it quickly. And it did – we ended up skipping a whole section of song and voiceovers because the walk was proceeding faster than we anticipated.

This project will stay with me as a highlight in my career. It was such a brave thing for Norfolk & Norwich Festival and Chris Bullzini to do, and I’m glad that in our own way myself and Vicky helped to create some magic and some atmosphere to support this event. The best part for me was listening to others and sharing the stories. I’m very grateful to everyone who gave up their time to talk to me. 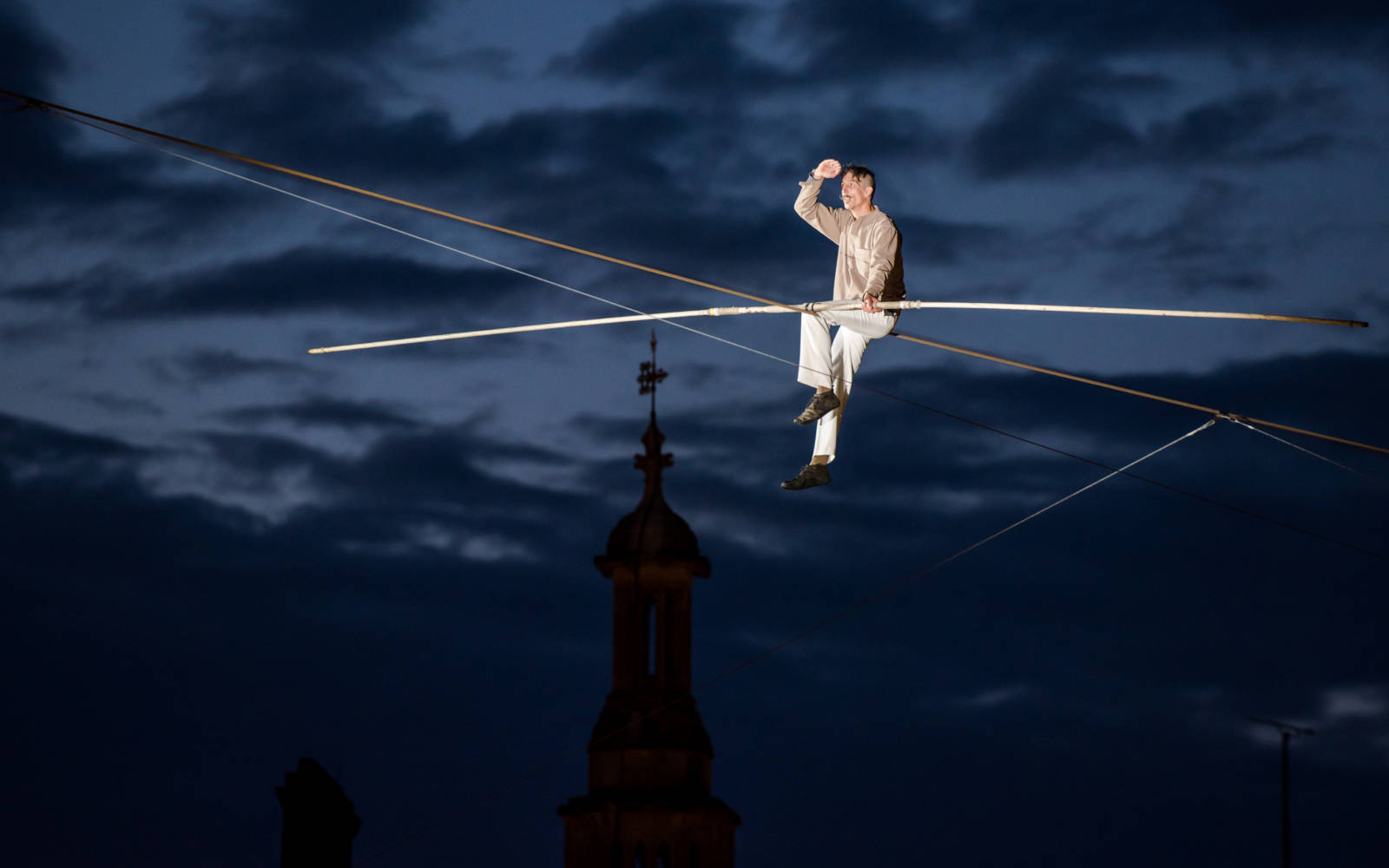 Helen is currently working on Mark Thomas’s Lockdown Check Up, Medicine, a new play by Enda Walsh and Unlocking Our Sound Heritage, a project at Norfolk Records Office. You can find out more about her here, or get in touch with her at helen@helenatkinson.org.uk. 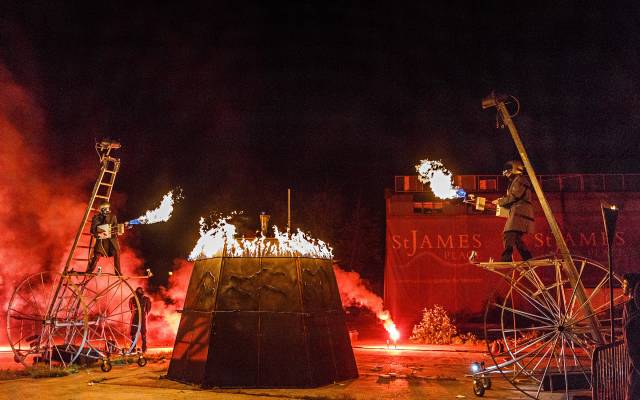 Read: My First 6 Months as an Assistant 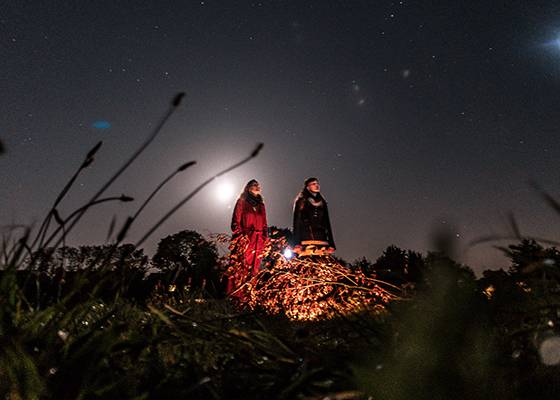